I do believe that a visitor is always a visitor. No matter how hard I try to see things beneath the surface, my observations not only reflect a visitor’s perspective more than anything else but also is bias in many ways. I do, however, want to clear the air and say that even though in my eyes the beautiful things in Seoul are overwhelmingly abundant, I do see poverty here as well. And hear about things that are not very pleasant. So before I go on to talk about yet another great thing about Seoul, let me give you one example – not in any way a light one.

In the picture above, the old man is collecting recyclable materials in a rich area to sell to recycling centers. I saw more than one of them.

Now to my favorites.

When my husband and I first visited Seoul in July 2010, we received an envelope, without any note, from our dear friend in which there were two cute, beautiful “things” we didn’t know what to make of (first picture above). Our best bet was that they were some delicate key chains for souvenirs. We were very touched by his welcoming gifts.

After one day exploring the subway in Seoul, we met him and were asked, “Did you use the pass I gave you?” Imagine how surprised we were because we thought “anybody” knew what a bus/train/subway pass looked like. So, “What pass?” We responded in awe.

Guess what, the little cute thing was the pass. Who would have guessed? So there you go, Korean people love gadgets – beautiful gadgets, to be more precise.

The story is not done there. I love the pass so much I have kept it as a souvenir ever since. When we visited Seoul again this time, two years and four months later, I brought the pass with me. At the subway station, I tried to use it again. I placed the pass on the vending machine, and it read, “Remaining balance: 5000 won.” My lovely pass is still valid and ready for me to use. Hallelujah! Talking about high-tech, and low-tech people like us!!! 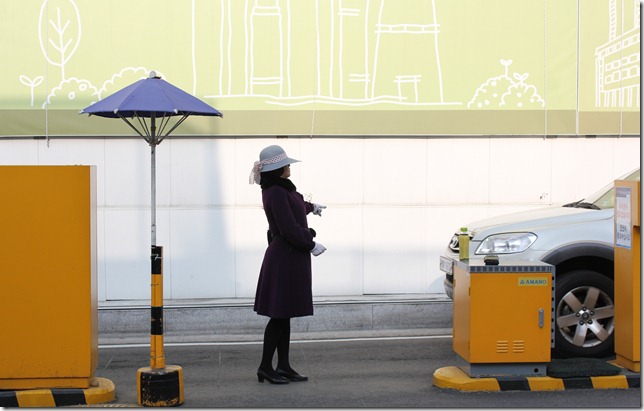 Could you guess what this elegant lady is doing?

–> She is directing the traffic. Things are very well-organized in Seoul. At peak times, there are traffic guides in all places. The men wear boring uniform of beige, grey, black colors. This lady is also wearing a kind of winter women “uniform” here. But wool coat, dress and stocking, cute hat, and nice shoes for uniform? Maybe only in Seoul!!

Here is another look: pay attention to the details, and the cute umbrella as well!