This is the first formal interview I conducted. It was in English. A version of it has been published by the Vien Dong Daily News (Online Vietnamese version here). I could not get the English version done until now. 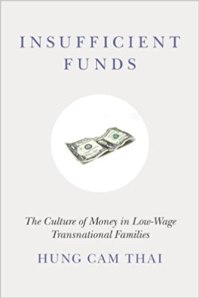 Hung Cam Thai is a tenured professor at Pomona College. He divides his time between Los Angeles, Saigon, and Dubrovnik.

Anvi Hoàng: Will the trend of Việt Kiều going back to Vietnam to get married be here to stay?

Hung Cam Thai: This trans-Pacific market started in the mid 1990s and has continued – there are still many Việt Kiều men who go back to Vietnam to get married. So we can still find the same patterns in the next ten years. I think the situation will change in due course as men and women learn about the mismatched expectations and outcomes of these marriages.

Anvi Hoàng: How representative is the transnational marriage trend among Vietnamese Americans?

AH: Your book, For Better or For Worse, talks about the clash of dreams of these transnational marriages. Should Vietnamese people be sad, happy, or concerned about this?

HCT: That is a good question. I don’t have an opinion on how people should feel about it, but it does raise some concerns for me as a scholar. The phenomenon of low-wage men marrying women who have more education than them is a typical pattern that represents fifty five percent of the couples in my study. In the book, I focus on the dynamics of their marriages, not about how much they love or don’t love each other. But I truly believe that these people love each other initially, and they go into the marriage with full desires to make it work.

We know that when men marry women who are more educated than them, things tend not to work out very well. One of the concerns I would have is the ways in which these people interpret their marriageability and the way in which they approach thinking of choosing a partner. So even though this man, for example, Minh, in chapter 6, works  in a restaurant, he still wants an educated wife. He knows he cannot find such a woman in the U.S. He is not so sure he can find a woman in Vietnam either, but he knows his chances are better. So he goes to Vietnam, and through the help of his family and friends, he met Thanh. What happens is that the authentic feelings of these people in the long run will change. At this moment in time, he feels an inflated sense of self-esteem – he has an American passport, he thinks that somehow that brings him a little more power, and that somehow he is eligible to marry a woman who is educated.

By the same token, the educated women in Vietnam take time to acquire an education. By the time they get the amount of education they want, they become, in Vietnamese standards, older than the typical marriageable woman. Not only that, they become more picky – they become an established woman, they come from generally good families, educated, independent. In the eyes of most Vietnamese men out there, they are not so desirable for a number of reasons. They themselves look around and want someone better than them, but the men around them are not necessarily looking for such women, since educated men in Vietnam tend to marry ‘down’ economically. The typical Vietnamese culture is that highly educated men might marry highly educated women, but the middle class are not necessarily looking for highly educated women.

So when a Vietnamese American man, who is deprived of girlfriends most of his life, comes to Vietnam, he treats these women very nicely. He doesn’t have a college degree, so what? He lives in the U.S. so he must have some kind of privilege and that looks like a good prospect, as far as the women in Vietnam see it. For the first time, both the men and the women are being desired, in their peculiar global contexts. So all these paradoxes exist because of the international inequities between nation states.

AH: In this international marriage market, what actors initiate the process?

HCT: The matchmaker. Part of the chapter about the matchmaker is to help readers understand that matchmaking is central to these marriages – not matchmaking in the traditional sense but in a pre-modern but also post-modern way that anybody and everybody can be a matchmaker in any corner of the globe. I met couples where the man lives in America, the woman in Vietnam, and a cousin in Australia introduced them. These global connections make it happen and are a reflection of the immense dispersion of Vietnamese globally.

AH: There are often talks about the impact of globalization on people’s life as if they either are victims or decision makers. Are Vietnamese people active actors in this marriage scene?

HCT: I made it clear in the book that it is not an “either-or” process. These people are not victims of globalization who cannot make their own decisions. It is not a case when they are completely rational about the decisions that they made either. I think they are somewhere in between. Many of these people are constrained structurally and demographically at a particular moment in their lives that compels them to make these decisions. They also don’t make these decisions in a vacuum.

I hope the book came out fairly because I tried to portray these men and women fairly. I could have easily written a book about how the men are jerks and they just want to marry submissive women; or the women, all they want is a visa to go to the U.S. I hope the book came across as describing so many complexities in these people’s lives, that there are different types of marriages, different types of people who enter international marriages, that there is not only one model. Obviously there is a typical model but even this typical model is embedded in some structural constraints.

AH: With more than three hundred thousand copies, this book is a huge success for an academic book. Don’t you think?

HCT: As a professor you have to write a book that is appealing to an academic community. The book is used a lot in Marriage and Family courses, so it needs to have the theories and academic jargons. Yet, I also want to make it accessible to the general public. So if people read the book and skip the introduction and conclusion, everything in between is quite accessible and understandable.

AH: What other factors contribute to the popularity of this book?

HCT: Because it is the first book that looks at Vietnamese transnational families. What people have known about Vietnamese people prior to my book is all about refugees, their difficulties, their welfare, their lives on the gulf coast of Mississippi – basically suffering people. This book opens up a fresh perspective to a lot of people to understand that the Vietnamese have emotional lives, needs and desires. They have yearnings for their homeland but it is also complicated by the restrictions of being abroad. So it is really the first book that pays attention to the reality of transnational family types.

Even today, most of what you read about Vietnamese people fall into two types of stories: either they are refugees and how they become successful in America, or their lives in the U.S. You don’t really know anything about their family back home. An average American who reads about the Vietnamese know that at one point in time Vietnamese people came to the U.S., but somehow they understand that Vietnam just froze in time. So this book helps people understand that these communities have struggles, they have needs and desires, they have marriage partners, they are participants in a global emotional economy. I think that is why the book is popular.

AH: It has been many years since you conducted the interviews with those transnational couples. Do you have follow-up stories about how they are doing now?

HCT: I keep in touch about with thirty percent of the couples. There are some surprises. There are couples I thought would never work out, but yet they are very happy; and the people who I thought would be very happy aren’t working out. In many ways it is like a soap opera – these people’s lives are continually unfolding, they take different turns and they are not very predictable.