By now, if you are not convinced that Bloomington is an  especially lovely town and IU Opera Theater a unique institution, then I have not done enough. So here is some more.

That is Bloomington – convenient, quiet, and safe – a gem the locals would prefer to keep that way. And why not. Without the traffic, noise and pollution of a big city, Bloomington is indeed “bombarded” with free cultural and musical activities. What is available on a given day as entertainments in one form or another is more than what anyone can physically and mentally handle. There are choices of lectures, art exhibitions, plays, musicals, jazz concerts, Broadway shows, chamber music concerts, or operas, etc. These events are only fifteen minutes away from wherever you are in Bloomington, all year round. Did I mention most of them are free? 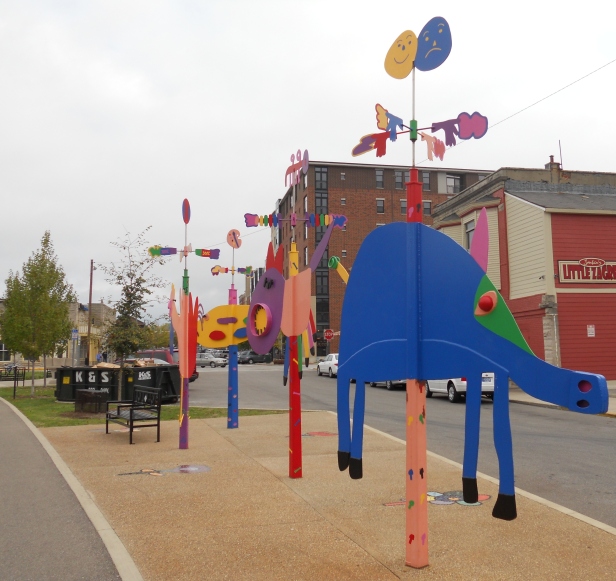 Located in the Midwest, IU Bloomington used to be known as a safe haven from all the East and West coasts commotions around the time of WWII and the Cold War, and IU opera production started being known nationally since the 1960s. Gone are those times, and so are those who knew IU opera. Now is the time for big cities. Without this advantage, IU Opera has to spread the word anew.

Right off the official website: Full productions by IU Opera Theater are presented under the roof of the Musical Arts Center (MAC) and four orchestras accompany the works. As one of the grandest performance venues in the United States, the MAC seats 1,460. It features acoustical design and technical capabilities that are among the best in the United States. Regularly compared to the Metropolitan Opera in New York City, the main stage is 90 feet wide by 60 feet deep. The backstage area occupies more than half the building and provides a state-of-the art theater space for technical work. All eyes should now be on the production by IU Opera Theater.

Definitely a big operation, much bigger than most regional companies that do three operas a year, yet IU Opera Theater is understaffed. Opera companies such as Cincinnati, Saint Louis, or Atlanta have three or four times the staff of IU Opera Theater – basically one professional department head and then students for each department. An outside professional would often be surprised at its production scale. This speaks volumes for the fact that not only do IU Opera Theater get by with their outstanding students who can do wonders in a right environment, but they are able to maintain a 150-200 thousand dollar average budget for an opera. (This amount does not include the commission for a new opera.) “The most expensive opera was about 260,” Mr. Tim Stebbins, Executive Director of Production for IU Opera Theater, recalled, “but in the outside world, that opera probably would have cost a million or more. We get by because there is no union labor, and the average rate we pay students is not what you would find in the professional world.”

Not to let those numbers fool you seems to be a fair warning since IU Opera productions can wow any audience. Modeling after the professional opera industry, IU Opera Theater serves as a learning laboratory for vocalists and instrumentalists of IU Jacobs School of Music. With their superb facilities, world-renowned faculties, and talented students IU Opera Theater productions are comparable to the MET’s, for many of the things that the MET do in their productions, they do the same thing here. “The MET might spend a million dollars just on lighting design,” said Mr. Stebbins, “so they are able to do more magical things technically. That I think really is where the difference is, besides the singers, of course.” But in terms of just producing traditional scenery and being able to run a big scale production, Mr. Stebbins is confident that IU Opera Theater “is probably right in line with what the MET or other professional company is doing.”

On the list of the wow team notables are the recent retiree and great designer David Higgins who has been with IU Opera Theater for so long; Robert O’Hearn who had a big career at the MET and then made it to IU Opera Theater for nearly twenty years. Next year, Dough Fitch who just did “The Cunning Little Vixen” with the New York Philharmonic and Robert Perdziola who is top of the line as a designer will join the team. Mr. Stebbins is working hard to make sure that the personnel in those professional positions in designing, conducting and directing are of the same caliber as those working with the MET or the Chicago Lyrics, etc. So in a way, it makes sense, “they design for them, they design for us,” Mr. Stebbins said. “We just get it done differently, with much less staff, with our students, and that is a an amazing thing.”

Now to let the numbers wow you seems to be the fair thing: IU Opera’s six full scale productions a year is an achievement that only a few opera companies are able to make; three of them, brand new, being further kudos even more difficult for any to keep up with. This will be the same working environment when IU Opera Theater is staging The Tale of Lady Thị Kính by PQ Phan in 2014. This opera is an invitation to the Vietnamese American community to venture more into arts fields, and to the American audience to rediscover “Việt Nam” from a new perspective and on a new level.