There is an idyllic city up upon the mountains in the central part of Việt Nam called Đà Lạt. The last king of Việt Nam, Bảo Đại, turned it into his vacation home years ago. He brought with him the royal families and the distant relatives, the government officials and their families. My grand-father was among them.

Three hundred kilometers north of Sài Gòn (where I grew up), Đà Lạt used to be my childhood haven for years. As the school year came to an end, we would pack and come to visit and stay with grandma for three summer months. Sneaking around four corners of her garden hiding and seeking among the chayote vines, then trekking the hills and valleys, we built our memories of Đà Lạt.

Twenty years since then, I came back. At first sight, nothing seems to change, and there are not many more people on the street, either. However, as I edged near, some of the hills are already off limit to the public. They are rented to some private business who built a golf course there for the well-off to enjoy. Proud residents of Đà Lạt considered it a capitalist slap into their imperial face and protested. In avail. It was sold. Ouch. We used to roam the grassy hills up there till our legs failed us. We used to pick the perfectly shaped pine cones and stuff our pockets with them till the cones’ edges poked through the fabric and scratched us. Hills – no more.

Even the coolness of Đà Lạt is questionable. People in Sài Gòn used to consider Đà Lạt a place they come to cool themselves down, especially in summer, all due to its idealistically chill weather year round. Over the years the temperature in Đà Lạt has been rising up to the point electric fans have been used in summer, a phenomenon unheard of approximately ten years back. A T-shirt will do for summer in Đà Lạt. Chill – no more.

I understand how disappointed it could become for some Việt Kiều (Vietnamese overseas) who came back for their childhood memory and faced changes similar to the ones described above. That explains for the earful of complaints from them about how their hometown has changed beyond recognition and that they don’t want to visit it any more as it is more painful that way.

I went to Đà Lạt, determined to get my childhood memories back. Come on people. You change, the world changes, and you don’t want your hometown to change. How unfair. Your memory can take a leap, don’t underestimate it. Well, it is easier said than done. But I did try. Here is what I did.

Staying. I got a hotel room up high that gives a great view of the lake, the hills, and the downtown market. I am not twenty any more and done looking for myself a student’s way. A back-packer’s style of living is not an ideal environment for me to ponder about the past and the present. Basically, I don’t want to start my day by a complaint about the bathroom to the hotel staff. Instead, I woke up at five, opened the French doors, and voilà: the edges of the mountains are sharp in contrast to the soft opaque layers of fog on the surface of the lake. I could almost reach them if I held out my hand long enough. The stillness of time requires a submerge of self in nature. I let the fog and the early chill enter the room. Wrapped in the cool air and warm arms of my beloved who stood by, we watched the light coming onto the lake. I am one of the luckiest people in the whole world. What else do I need? Walled by fun and love – this is pretty much the kind of feeling a child in me reverberates to. The sunrise, the sunset, and the sunshine over the lake never fail to tickle the heart, just like the child who never ceases to reach for the sun.

Sightseeing: After all is said and done about the gardens and the lakes and the valleys and the waterfalls – where the love games for the youngsters go on, Đà Lạt is amazingly striking on foot. Red-roof houses popping up at every corner unexpectedly dot the hills, and spread on, creating a canvas of abstract nature on which your imagination and memory can stroll freely. There, in the quiet of the scenery, I could hear my own feelings and thoughts. From a distance, the inner child emerged, almost visible on the abstract canvas in front of me. She is connecting the dots and having heaps of a great time.

Interacting: Making sense of a local and universal sensibility, I found myself at Linh Sơn pagoda. It didn’t occur to me that I should visit any pagodas in Đà Lạt as they are not a big part of my memory. Yet, it was a brilliant coincidence that I set out to visit several there. Besides the silence and sacred atmosphere at Linh Sơn not found in a regular tourist temple, the kind and friendly Buddhists there, together with the teachers-monks many of them being doctorate degree holders in Theology, are very willing to engage in a conversation. The calmness I found in them seemed to restore the balance that I needed badly given the constant noise that surrounded me in Sài Gòn. I felt right among the monks and the Buddhists, and their chanting.

Being a non-believer, I was seriously scared to think about whether the increasing sense of spirituality in me right now and the greater appreciation of religion itself have anything to do with aging. I often hear older people say such a thing as “a gold leaf falling back to its root.” I don’t want to think I am at an age that fighting is a belligerent game to avoid and reconciliation wisdom. 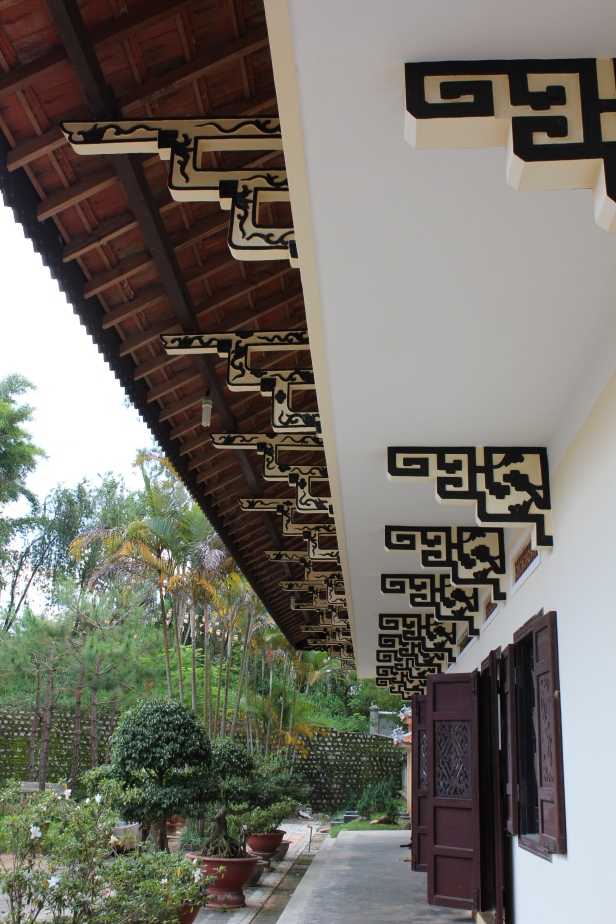 I don’t think so. Nope. I checked myself. I have seen much older people hanging tight to their grudge. They are bitter and sore. I was lucky to experience the refreshment of self-cells. Without much ado, I realized the best thing for a reconnection is to build new memories on the foundation of the old ones, utilizing the glory and aura spiking up from underneath. That way, Đà Lạt is a haven for my adult-hood in the years to come.