The Tale of Lady Thị Kính by P.Q. Phan will be premiered at Indiana University Jacobs School of Music in 2014. It is difficult for me to explain to the Vietnamese community in America why the first opera by a Vietnamese American composer featuring a popular Vietnamese folktale is produced in Bloomington, IN, where there are only a handful of Vietnamese Americans. They would not believe the reasons I will give them, until they come and see for themselves. But I just have to try to paint a picture for them.

From Woods and Peace

Once upon a time, Indiana University Bloomington was a safe haven for scholars from foreign countries overrun by the Nazi German. It is not difficult to imagine that they found peace here as Bloomington is nestled in the woods and hills. As a result of late IU President Herman B Wells’s ardent advocacy for the preservation of trees and green space on campus, IU Bloomington is now often considered one of the top five most beautiful campuses in the country.

Located in the Midwest, Bloomington is woods and lakes away from both the Pacific and Atlantic oceans. It is not busy as New York or LA. There are no phở restaurant or bánh mì (Vietnamese sandwich) shops in Bloomington, either. Hills after hills, woods after woods, lakes after lakes, and serenity – a lot of it – are what we have here in Bloomington. In the Winter, the bare trees are of a silvery white; and in the Summer, the woods are of a lustrous green, making it feel like passing through boxwood labyrinth driving on the neat city roads. It is by no means an overstatement to say that Bloomington is a timeless haven in the woods. 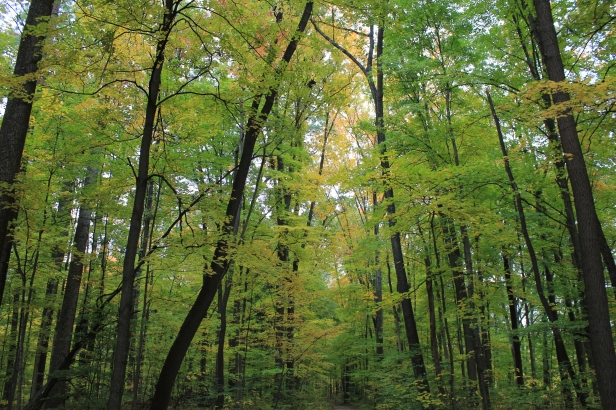 To Opera “Festivals” in Bloomington

The opera program at IU School of Music began to flourish in the 1940s. Even before the establishment of IU Opera Theater in 1972 as a separate entity dedicated to creating the best performance environment for music students, the opera production at IU Bloomington already caught national attention. These days, one of the attractions of IU Jacobs School of Music to music students all over the country and around the world is the opera productions by IU Opera Theater.

During the school year, Bloomington is especially bustling with more than a thousand music events – recitals, chamber orchestra concerts, symphony orchestra concerts, among a plethora of others. Most inspiring of all for serious music lovers is the opera program. The opera performances draw professionals, young and senior audience alike to IU Opera Theater at the Musical Arts Center (MAC) with six productions a year – a record very difficult to match for many.

On opera nights, MAC Theater could be described as a “Clean, Well-Lighted Place” where people hustle around like birds busily building their nests in Spring. In front of the Theater are giant buses dropping off the seniors that they have picked up from the retirement communities. And who gets off the bus but ladies and gentlemen in the best outfits for their opera night. Whether with or without walkers, they are chatting their way into the Theater Hall, their faces beaming, like children again.

Student couples and groups are in no way behind. In order to compete with their peers, they don their most hip jackets and dresses. I often notice music students and professors making the finest fashion statements. Other professionals are the middle group between students and seniors. Being daunting rivals as they are, they also take the opportunity to dress up with clothes and jewelry they have put aside for special occasions. Together, they are trotting along the curving paths outside the Theater and strolling around the Hall inside as if at an art festival. All this is to express their belief in what opera going is supposed to be, or unknowingly, they revive opera enjoyment as it originally was – a pleasure in lavishness and a vibrant social setting. It is very pleasant to watch them all – the people and the place.

A visitor from the East or West coast will observe with amazement at how calm and joyous opera goers are in Bloomington. There is absence of scenes where people complain about the stress of being stuck in the traffic somewhere, or scenes where they rush out of the theater right before the standing ovation to hit the road ahead of everyone. It only takes fifteen minutes or so to cruise around Bloomington. Besides, the night is long, why worry!

To a Refuge from Time

At some point, the whole picture of the Bloomington opera festival seems frozen in time. Opera goers merge into the glittering atmosphere of lights and colorful billboard-sized posters and people-talking-and-laughing; then merge one more time into the performance on stage, forgetful of time. For young people and professionals, this spiritual experience is an effective way to de-stress that they really appreciate. For seniors whose lines of activities and time are insidiously slipping into oblivion, this very opera time is a wakening chime that accompanies them in an exciting short spell with the opera festival. They will later get on the bus to return to their everyday reality, and wait to be woken again at the next opera festival time.

If people’s thoughts are often masked by noises of activities both purposeful and gratuitous, people have a real chance to clear their minds in Bloomington to enjoy opera in a special way. Bloomington opera festival is full of colors and sounds, yet calm and quiet enough for people to hear their voice and to hear even their thoughts. This “Bloomington” special effect is particularly appropriate for the enjoyment of The Tale of Lady Thị Kính whose universal elements regarding human struggles to make sense of life transcend temporal dimension. The story itself also transposes space to allow the audience ample latitude pondering on human life and beyond.

By way of a conclusion for the Vietnamese American audience, IU Opera Theater is among the best opera companies in America with its unmatched professional performances. Its world premiers are reviewed by experts in the field. Therefore, it goes without saying that not only does the staging of The Tale of Lady Thị Kính by IU Opera Theater bring honor to its composer, but its production also provides reasons for pride for the Vietnamese community in the United States. The audience could justifiably look forward to its premier.

***** The Vietnamese version of this article has been printed and published by the Vien Dong Daily News. Read my online version here. 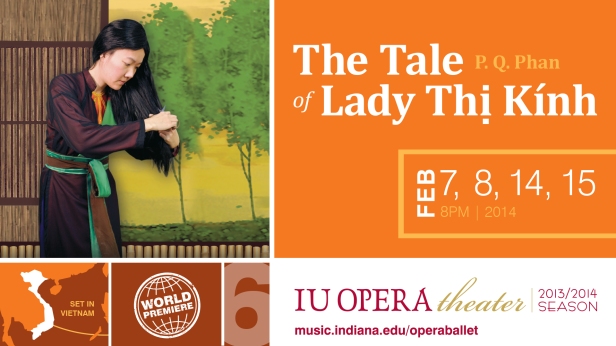